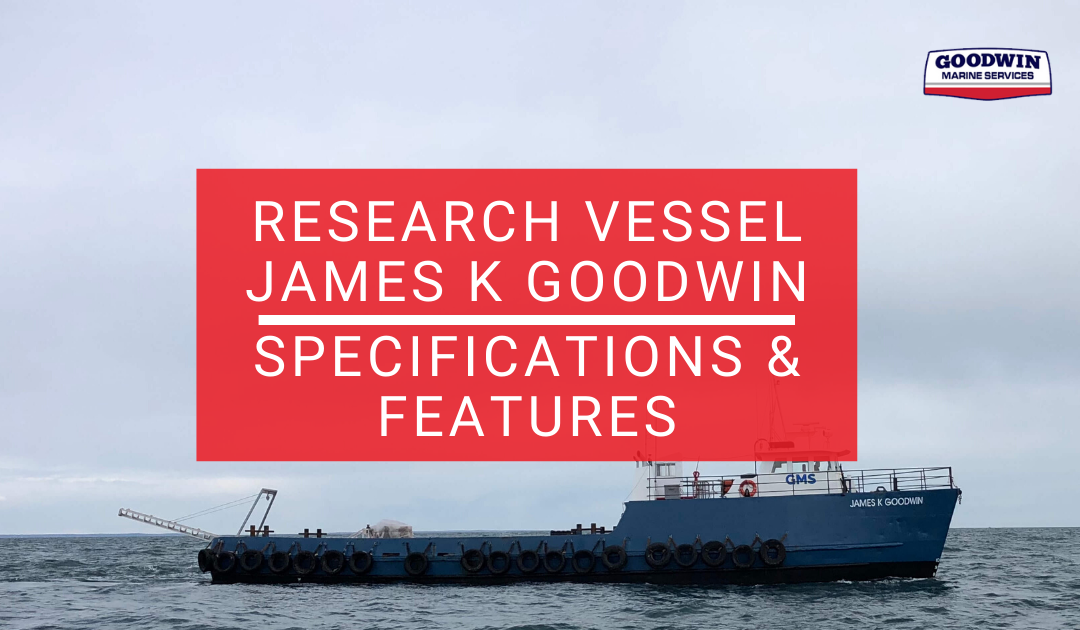 The James K. Goodwin research vessel has been used on a number of oceanographic surveys for many different clients, ranging from The U.S. Army Corp of Engineers to the Massachusetts Department of Conservation and Recreation. It has also been engaged in activities as diverse as AUV/ROV Operations, Dredge Monitoring, and Fishery Studies.

It is well equipped to carry out these tasks, and its superior construction makes it popular as a vessel for use in all manner of scientific exploration. The James K. Goodwin was added to our fleet after we identified a need for a longer and larger boat, and after we researched the different designs which were available. Eventually, we decided that the Graham design was best because of the way the cabin flows naturally off the main deck. Here are some of the specific features and statistics regarding the James K. Goodwin.

This vessel is 110 feet long, with a 26 foot beam, and it has a 7 foot draft when carrying no ballast, with a 10 foot draft when ballasted. It has a complete galley, as well as two full heads equipped with showers, and is also outfitted with heating and air conditioning for full passenger comfort. The laboratory area is furnished with a television, stereo, and DVD player for those times in between work assignments. There are separate quarters for the crew and any clients who happen to be aboard, and it also has a barbecue grill for those days when you have the time.

Onboard machinery and equipment

The James K. Goodwin is equipped with two 4–71 Detroit Generators, capable of producing 40 kW of power. It has a rear mounted 10 ton hydraulic A-frame which has 17 feet of vertical clearance from the deck, and a high-capacity deck mounted winch which has 18,000 pounds of capacity. It has a 4-inch pipe sonar pole with standard 4-inch pipe flange for equipment mounting, with a number of different adapters available.

The hydraulic pump is a 4–71 Detroit model, and the vessel is powered by twin 16V92N Detroit main engines. It also has wheelhouse bulkhead pass through, as well as an aft pass through. There are two Uniden UM3-80 VHF radios on board, as well as a JRC JAMA–2254 Raster Scan Radar. It’s equipped with a PC plotter which incorporates offshore navigation software, and also has a Furuno GPS/WAAS Navigator GP32. It has a standard Horizon Loud Hailer, model VLH–3000.

Since safety is one of the most important aspects of any seagoing vessel, the James K. Goodwin is equipped with a number of safety systems for the benefit of those on board, and for the safety of  the vessel itself. There is a 50-man life raft available for usage, along with three 20-inch throwable life rings and 50 life vests, with another 12 survival suits available for extremely cold water temperatures.

There are eight fire extinguishers on board, in the event that any kind of flame should break out, and there are fire fighting hoses on deck which can be used in tandem with the fire extinguishers to quell any shipboard flames which break out. There’s emergency lighting on board which will be triggered whenever there is a sudden loss of power, so that you won’t be left in the dark.

When it’s necessary to signal other vessels, you can use the 50-mile Orion flare kit, which will have tremendous visibility and reach out at sea. There is also a SOLAS ACR RLB-37 CAT1 emergency position indicating radio beacon (EPIRB) on board, which will allow you to signal the precise position of the vessel, if you should need assistance while at sea.